We’ve all treated someone in a way that we regret. We believe our perception of a situation only to find out that if we had opened our eyes or hearts a bit more we would have acted differently. Sometimes we have the chance to apologize, and sometimes it’s just too late. This is a story of the latter, and one that we can all learn from. 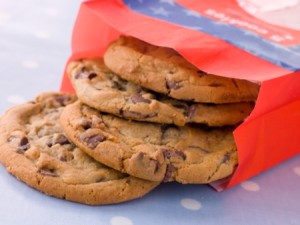 A young lady was waiting in the airport’s departure area pending her flight home. After realizing there was a delay, she bought a small bag of chocolate chip cookies to enjoy while she waited.

She made her way to the VIP lounge to sit and relax. She sat down in an armchair to enjoy her cookies and read her book.

Beside her sat a pleasant, young man reading his book. The bag of cookies between them. Neither spoke. The young lady took her first cookie. Then, much to her surprise, the young man also took a cookie.

He said nothing. She said nothing but was clearly bothered. For each cookie she took, he did the same. Again, no words or looks were exchanged, but her anger grew. This continued until there was only one cookie left.

Then the man took the last cookie and divided in half – leaving her half in the bag.

Well, that was it! She was so infuriated and bothered by his lack of consideration that she packed up her things and moved. Soon she boarded her flight, took her seat and began to settle in for her trip – still very upset by this young man’s lack of manners.

She went into her purse and she felt her heart sink. There, in her purse, was HER bag of cookies – unopened and untouched. She was so ashamed of how she responded and was further upset by the realization that it was too late to make amends and apologize.

This young man had shared HIS cookies without saying a word. He even gave her half of his last one. He wasn’t upset or worried about her actions. He gave without condition or feelings of anger or bitterness.