We've all read this, but how many of us have acted on it?

Have you ever seen someone in need and not done something to help, only to have regrets afterward? We can’t all help everyone, but we can all help someone. And just think of the collective change we could make if we all helped just one person.

Just like Begin with Yes is about taking small steps that lead to bigger change, if we all take a small step toward helping someone in need, many lives can be changed.

Think for just a moment about someone in your life who could use a little bit of help. Or just truly open your eyes to the world around you as you go through your day. When you find that person who was put in your path, also find the courage to act on it – that’s when things really happen. You’ll learn just how capable you are of making a difference, and it will make a difference in your life too.

My challenge for you today… open your heart, open your eyes, and open your hands to reach out to someone in need.

I have a friend who had a chance encounter at a grocery store. An elderly woman was bagging his groceries, and as she did the manager stopped by to tell her she could go home. The woman started crying, so as he walked out he asked her what was wrong and if she was OK.

It turns out that she was living on Social Security and needed the extra money as the winter approached to pay for heating oil for her house. She ran short the previous winter and spent many cold nights alone. Her husband had died of brain cancer less than a year ago and she was really struggling to make ends meet.

He left to go to an ATM to get a little cash to help her out, but when he returned he had an idea. He asked her if she’d be ok with him sharing her story with others, then he started a fundraising campaign that raised over $10,000. He could have walked past and not cared enough to ask her the question, but that one small action created a big change in her life.

Those opportunities are presented to each of us at one time or another. Yes, it’s often easier to walk away, but saying “yes” leads you to do things you never thought you could do.

While this is a true story, here’s a fictional one that I hope inspires you to make a difference too, even in the face of what might seem like insurmountable odds.

Adapted from The Star Thrower, by Loren Eiseley 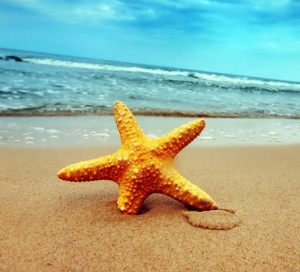 Once upon a time, there was an old man who walked on the beach every morning before he went to work. Early one morning he was walking along the shore after a big storm had passed. He found the entire stretch of beach littered with starfish – as far as the eye could see, stretching north and south.

The young girl paused for just a second, then looked up and replied “I’m throwing starfish into the sea. The tide washed them up onto the beach and they can’t return to the water by themselves, and when the sun gets high, they’ll die unless I help them get back into the water.”

The old man replied, “But there are tens of thousands of starfish on this beach. I’m afraid you won’t really be able to make much of a difference.”

The girl bent down, picked up yet another starfish and, as the old man watched, carried it a few steps and set it in ocean. Then she turned to the old man and said, “I made a difference to that one!”