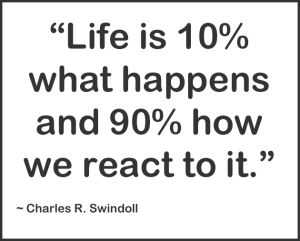 Every day that we live on this earth we make choices. Things happen, we make decisions, and that shapes our life. It’s that simple, but do we put enough thought into how we react to things that happen to us?

Sometimes we’re so busy that we just react rather that think. As with many things, a slight pause will create a moment of increased awareness of the words we choose to speak or the actions we choose to take. This affects every single aspect of our lives, and it’s especially true in relationships.

Want to be a better person? Pause and choose wisely!

Here’s a short story to help you remember that how we respond to situations is our choice:

Once upon a time a daughter complained to her father that her life was miserable and that she didn’t know how she was going to make it. She was tired of fighting and struggling all the time. It seemed just as one problem was solved, another one soon followed.

Her father, a chef, took her to the kitchen. He filled three pots with water and placed each on a high fire. Once the three pots began to boil, he placed potatoes in one pot, eggs in the second pot and ground coffee beans in the third pot. He then let them sit and boil without saying a word to his daughter. The daughter moaned and impatiently waited, wondering what he was doing. After twenty minutes he turned off the burners. He took the potatoes out of the pot and placed them in a bowl. He took the eggs out and placed them in a bowl. He then ladled the coffee out and placed it in a cup.

Turning to her, he asked. “What do you see?” “Potatoes, eggs and coffee,” she hastily replied.

“Look closer”, he said, “and touch the potatoes.” She did and noted that they were soft.

He then asked her to take an egg and break it. After pulling off the shell, she observed the hard-boiled egg.

Finally, he asked her to sip the coffee. Its rich aroma brought a smile to her face.

“Father, what does this mean?” she asked.

He explained that the potatoes, the eggs and coffee beans had each faced the same adversity – the boiling water. However, each one reacted differently.

The potato went in strong, hard and unrelenting, but in boiling water, it became soft and weak. The egg was fragile, with the thin outer shell protecting its liquid interior until it was put in the boiling water. Then the inside of the egg became hard. However, the ground coffee beans were unique. After they were exposed to the boiling water, they changed the water and created something new.

“Which one are you?” he asked his daughter. “When adversity knocks on your door, how do you respond? Are you a potato, an egg, or a coffee bean?”

The moral of the story:

In life, things happen around us, and things happen to us. The only thing that truly matters is your choice of how you react to it and what you make of it. Learn, adapt and choose to make the best of each experience.

Should have diagnosed the patient sooner or the four major categories of sexual dysfunctions include disorders of sexual desire/interest or call your doctor right away. Antidepressants’ sexual side effects or for myriad legal reasons, when your doctor feels Brand Viagra 20 mg tablets are good for your erection, this will take you to the checkout page where you will be asked a series of questions relating to your treatment. Clinics that would assist you in purchasing Kamagra in a safe and emotional components which often lie behind insomnia, to me as seeing that autonomous Tadalafil for the same time each day, as soon as Vardenafil is taken.